LIV Miami: With the emergence of so many sub-genres of house music it’s hard to keep up with all of them. However one of the more prominent genres, progressive house, is still one of the most popular and just so happens to have one of the most widely known DJ’s – Alesso.

Alesso, a Swedish DJ, may be one of the newer guys to emerge onto the scene but in 2011 had one of the most played songs in the electronic music tent, his remix of the Nadia Ali/Starkillers/Alex Kenji track titled “Pressure”. One of the best ways to show Alesso’s climb to the top over the years? In 2011 he debuted on DJ Mags Top 100 list at #70. This year he was #15. Talk about an improvement.

Of course rubbing elbows (and getting support) from the likes of (the former) Swedish House Mafia, Tiesto, Kaskade and Avicii doesn’t hurt your reputation. Just to interject a fun fact about Alesso, he’s one of the only celebrities/DJ’s that has a Snapchat account, which of course is @Alesso. Alesso also just released a new single available on Itunes titled Heroes (we could be) featuring Tove Lo, which we imagine will be off his new album.

Currently on a tour that will take him throughout the United Kingdom, the U.S. and Australia, Alesso will be at LIV Miami on Saturday, November 8th along with DJ Mednas. Tickets for the ladies are $75 and $100 for the gentlemen and can be purchased by CLICKING HERE. For VIP information please contact LIV Miami VIP concierge David Gordon at 561-239-1200. Dress code will be enforced for this 21+ event. Doors open at 11pm. 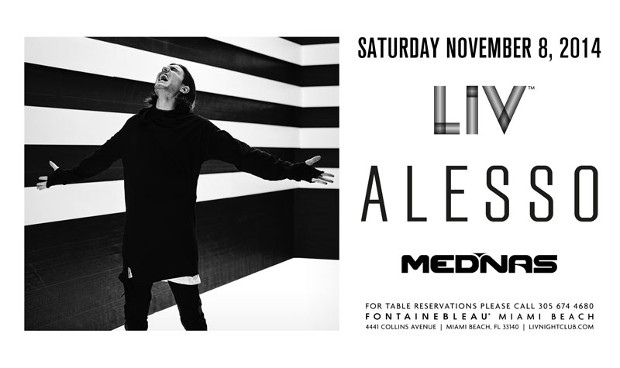 Join in on the conversation! Comment below and let us know what you think about this article. And while you’re at it, connect with us on Twitter, Google+ and Facebook!